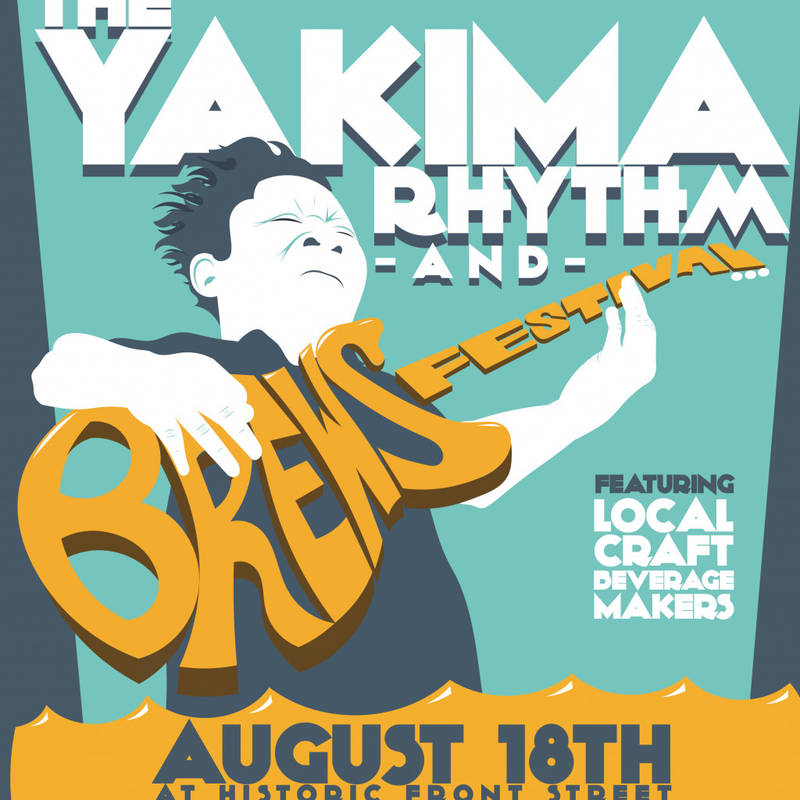 Yakima Rhythm & Brews Festival, formerly known as Blues & Brews, will be held August 18th on Historic Front Street with this year’s line up poised to provide a lot of rhythm and a good dose of funk. Sponsored by Solarity Credit Union and coordinated and managed by the Downtown Association of Yakima (DAY), Yakima Rhythm and Brews, in addition to the stellar musical line up, will feature a large variety of local and regional craft beverage makers, along with local food vendors to provide a perfect finishing touch to summer.

Live Guerrilla, once again, will manage production of the musical side and has booked a superb and diverse lineup that includes headliner Ural Thomas and The Pain, Cambalache, The Highsteppers, Adrian Xavier, Shoot Jake, and Mule Kick. Bios for each band in the lineup are below. Event organizer and Executive Director of DAY, Andrew Holt, says, “We really wanted to carve a niche with this event while making it appealing to a diverse audience. We asked Live Guerrilla to infuse some more rhythm and soul – that is the reason for the name change — and they have done a super job!” Holt adds, “We want people to finish up their summer dancing and feeling festive. We think this event will provide that.”

The local craft beverage makers serve as a centerpiece for the event. DAY will partner with Craft Beverage Yakima along with holding open a few at-large spots for regional crafters to provide an excellent tasting opportunity for the attending public.

The event, which also features selected local food vendors, is held in the quaint and picturesque environment of Historic Front Street. DAY appreciates the cooperation of all the businesses on Front Street for making the event possible.

Tickets can be purchased online at Yakimarhythm.com and at the Capitol Theatre Box Office beginning July 11. Gates will open at 3:30 pm with music starting at 4 pm and concluding at 10 pm. Pre-sale tickets are $15 and $20 at the gate. There will be a designated area for chairs on a first come first serve basis.

Yakima Rhythm and Brews is a 21-plus event. All those who purchase a ticket and enter the event must be over 21. No babies in strollers are allowed.

Yakima Rhythm and Brews, along with the many other events coordinated by DAY, is core to DAY’s mission of revitalizing Downtown Yakima. The goal is two-fold: to provide an enjoyable event for the Yakima community while bringing locals and visitors to downtown to see all that it has to offer.

Ural Thomas and the Pain – http://uralthomasandthepain.com

He started singing beneath his mother’s knee in church at the age of 3. By high school he led the doo-wop group the Mono Rays, breaking hearts and taking names at Jefferson High and Irvington Park along the way. Ural’s voice and songwriting soon gained national attention and he found himself sharing the stage with the likes of James Brown, Otis Redding, Johnny Guitar Watson and “Little” Stevie Wonder. He played the Apollo 44 times. He backed the Northwest’s biggest soul and garage outfits of the1960s (The Kingsmen, Paul Revere and the Raiders, Cavaliers Unlimited) and he never for a moment stopped teaching, singing and loving soul music..

Now Ural is poised to represent Portland on equal ground with contemporaries like Lee Fields, Sharon Jones and Charles Bradley, all of whom ultimately gained their dues in their golden years. To ensure the legacy he’s backed by a 9 piece band comprised of the some of the most recognizable session and solo players in town. Band leader/drummer Scott Magee (aka DJ Cooky Parker) has arranged a setlist compiled from the gilded age of soul and R&B and Ural originals, all with a sharp focus on moving the dance floor. The foot stomping days of Jump Town, USA have returned and Ural Thomas & the Pain are here to lead the way.

In September 1999, a pamphlet circulating in Seattle featured “the fresh sounds of Cambalache,” referring to the philosophy of the nine-piece Seattle salsa band that made its debut that year.

Ever since, Cambalache has challenged and redefined the characteristic sound of northwest salsa scene. Never afraid to incorporate new ideas, or to drop others that have been exploited. Cambalache’s eclectic style is an embodiment of the richness and diversity of Latin America. Deeply rooted in the latest music movements developing in Cuba and Puerto Rico, Cambalache’s performances are a blend of great salsa classics and contemporary tunes. At each performance, audiences are seduced by the energetic atmosphere of rumba and nueva salsa.

Now, after six years of hard work and continuous learning, Cambalache has placed itself at the top of the northwest salsa scene. They have broken attendance records of virtually every salsa club in the northwest of the USA, southwest of Canada and Alaska. Their show is considered to be one of the most entertaining and fun in the nw for salsa dancers as well as for those who just love the music. Testament to this is that Cambalache was selected to play at the 2001 Major League All-Star Game to a crowd of more than 55,000 people at Safeco Field in Seattle. In addition, Cambalache has opened for some of the biggest names in latin music including Grupo Niche de Colombia and El Gran Combo de Puerto Rico.

“Clasiqueando”, Cambalache’s first cd was officially released on April 23rd, 2004. Descarga from New York describes the cd as “killer dance club salsa… Highly combustible, get-on-the-dance floor tracks with zero filler material. Dj alert and highly recommended”. The cd has now gotten reviews from all over the world and it is being sold at the most important latin music stores in England, Holland, Germany, Italy, Switzerland, France, Belgium, Japan, Canada, Argentina, Chile and Peru.

Their youth, energy and intense passion for music are the defining element that complements the quality of their sound. This makes Cambalache a band with tremendous potential and a promising future.

Music-maker and community leader, Adrian Xavier has been spreading his uplifting message for almost two decades in his community, nationally and globally.

With 3 solo albums and nearly 20 album collaborations, Adrian Xavier has established himself as a performer of depth and dimension. His music is a union of positive energy with socially aware lyrics, striving to inspire people from all walks of life. Blending reggae and dub with genre bending projects, he has created music that delivers universal messages of peace, community and love. Whether he’s found performing with his band or solo acoustic, the music he makes touches audiences, providing a refreshing engaging space at each performance. Adrian Xavier’s story is tied to multi cultural awareness and what it means, his message is about living solutions.

From the start of his journey Adrian Xavier has been influenced by a diverse spectrum. While living in Los Angeles as a child, he went to see Michael Jackson and spent time in many recording studios with Rick Dees. Growing up in Seattle, he has always felt connected to the City’s music, art and cultural heritage. He has performed and recorded with original members of Heart, Clinton Fearon, Macklemore among many other legends who call Seattle home. These many experiences have played a substantial part in shaping him as an artist. Meeting or performing with legends like Ras Michael, John Trudel, Quincy Jones and Joe Higgs, have been instrumental in influencing his career as a musician.

The Highsteppers are a scorching hot classic soul and r&b band from Seattle.  Playing both the hits and deep cuts of the greatest era of music and keep the dance floor moving all night long.

With a full ten piece band, you’ll get no samples, no backing tracks, no electronic drums… Everything is live and done the way real rhythm and blues is supposed to be done.

Under the name Shoot Jake, Ben and Lindsay Johnson have taken their contemporary spin on blues rock and funk all around Washington State since their inception at the start of the decade, whether it’s a small downtown tavern or an important blues festival. Their funky, bass-heavy take on rock shines in the live setting, with Ben’s vocals taking center-stage and guiding their songs forward. Taking influence from everyone from Howlin’ Wolf to The Black Keys to Eric Clapton, Shoot Jake takes their varied influences and melts them all down into their fun sound tastefully. Patient rhythms, vigorous, yet loose guitar leads, groovy bass lines, and charming lead vocals are the core foundation of the band’s sound, a formula to which the band likes to diligently stick with live and in studio.

2012 saw Shoot Jake release their self-titled debut EP, when the band started was just a duo, but it wouldn’t be until the band would begin work on their debut full-length studio album, Get Real, released on December 16th, 2016, that they got their full band sound. With bassist Dustin Rademacher added to the band’s line-up just the year before Get Real was released, his chunky, prominent bass playing adds a new and welcome element to the band’s sound. Get Real is home to infectious highs, like “Uptight” and “Maybe,” and depressing, tear-in-your-beer lows, such as “Love Don’t Have to Kill” and “Leave Tonight.”