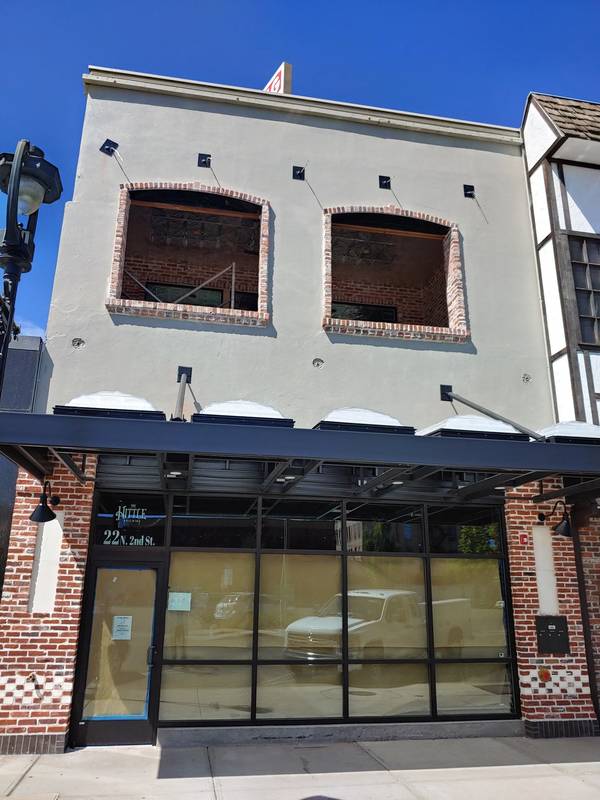 Downtown Yakima – The full renovation of The Hittle Building on N. Second Street in Downtown Yakima is nearing completion. A major part of the building’s remarkable rebirth is the striking upgrade to its façade. The façade project was a recipient of the Downtown Association of Yakima’s (DAY) Façade Improvement Grant Program. The grant program, in its fifth year, provided a $10,000 matching grant toward the façade upgrade.

The façade, which includes a new awning made of tubular steel and features 5 dome skylights, gives the building a completely new look with two newly added brick pillars, expansive energy efficient windows (framed by bronze metal that matches the new canopy), and a new door placement on the south corner. The canopy also has downward directional LED lighting. The total cost of the façade project is approximately $50,000.

“When the grant selection committee awarded this grant, we were really excited because we knew the tremendous impact this project would have not only on the building, but the entire block, “says Executive Director of DAY, Andrew Holt. “This is a transformational project. It was part of a complete renovation of a downtown structure, resulting in the type of mixed use that is ideal.”

The entire project includes a street level retail space of 2,500 square feet which is the future home of The Bier Den – a tap room that will also feature beer retail and pub food; a second-floor apartment and a third-floor townhouse. The building includes indoor parking, directional lighting that enhances the look of the building and eliminates shadows, and secure entries and exits.

“The goal of the grant program, “adds Holt, “is to, one, improve the look of the building but, two, to also spur economic vitality, and this project accomplishes that in a resounding way.”

The HIttle Building is located at 22 N. Second Street in the heart of Downtown Yakima. Ben and Ann Hittle purchased the building which was the former home of F-Com in January of 2019. The goal of renovating an entire building to create a vibrant, mixed-use hub in downtown is coming to fruition.

In its fifth year, the DAY Façade Improvement Grant Program has funded the following projects:

The Façade Improvement Grant Program is a 50/50 matching grant intended to foster revitalization in the downtown corridor.