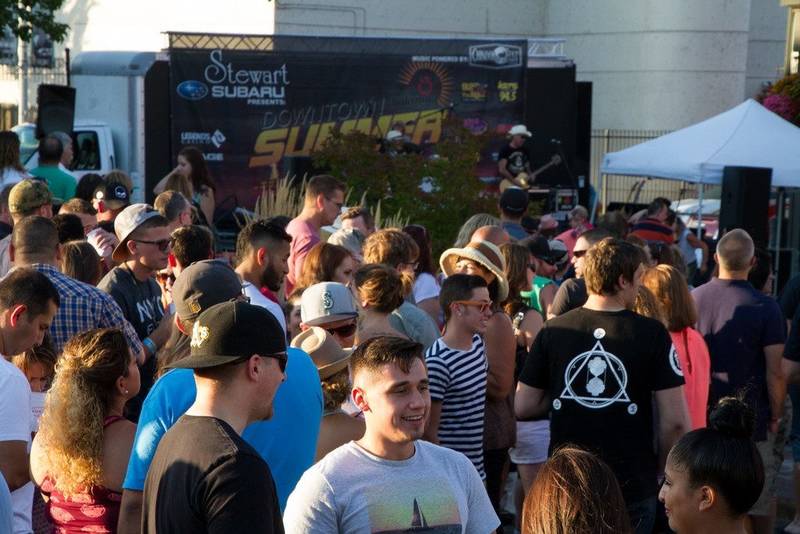 Downtown Summer Nights, the free Thursday night concert series with beer garden, food vendors and kid’s activities, has become a Yakima right of summer. The 10-week series – now in its 5th year — will run from Thursday, June 15 to August 17 with all activities occurring on historic North Front Street.

This year’s music lineup has been set, kicking off the first evening with Entice the Mice and The Scott Pemberton Band. For the full lineup of bands, visit downtownsummernights.com. Patrons will be treated to an excellent series of diverse music every week of the series along with all the other entertaining festivities. The evening begins at 5:30 pm and runs until 9 pm.

“Downtown Summer Nights has proven to be a great event for community members of all ages, “says Downtown Association of Yakima, Executive Director, Andrew Holt. “It is a great way to get a start on the weekend while enjoying the great setting of historic North Front Street. One of our goals at the Downtown Association of Yakima (DAY) is for folks to have a great experience when they come Downtown. And this event does just that.”

This year also marks a new partnership between DAY and Chinook Fest who bring their usual expertise in curating the musical entertainment and providing impeccable on-site production. DAY is in the process of taking over management Downtown Summer Nights as the City of Yakima, who spearheaded the creation of the event along with Townsquare Media, is now handing off the event to DAY.

“With the growth of DAY as an organization – hiring its first full-time director, opening up a new office, and taking on other opportunities – it is a natural fit for us to manage Downtown Summer Nights after the City did such a fantastic job in establishing this event,” says Holt. “In addition, it is a real plus to have Chinook Fest on board as they have been such a great partner in the past and were a key to the success of the just-completed Roots and Vines.”

The music and local beers are a major focus of the series but there are plenty of food vendors and restaurants located on Front Street to satisfy the pallet. And Downtown Summer Nights is also family oriented with a kids zone featuring planned activities for the younger crowd.

The Downtown Association of Yakima, Chinook Fest, the City of Yakima and media partner, Townsquare Media, invite you to enjoy Downtown Summer Nights!

Only patrons of 21 years of age or older are permitted into the beer garden. I.D.’s will be checked with the beer garden serving as a separate, cordoned off area.