Decorative Lighting and Other Improvements to Second Street Parklet 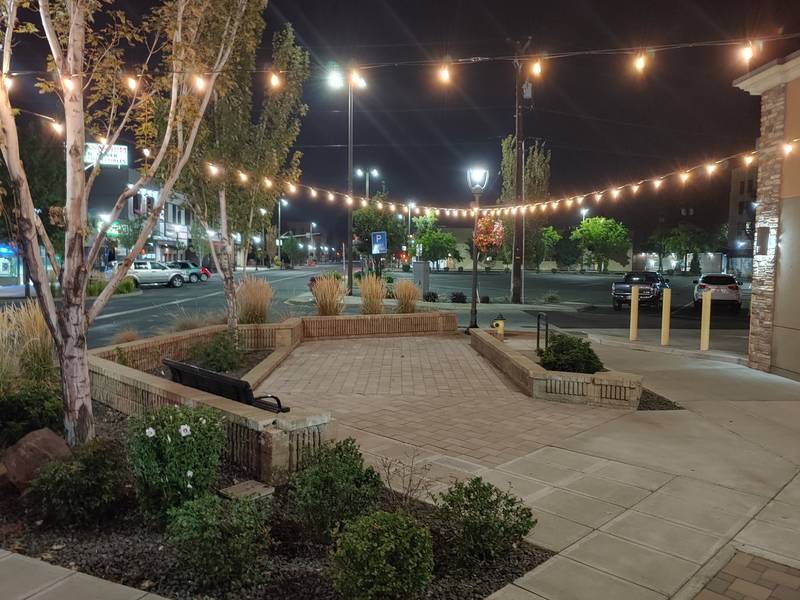 A partnership between the Public Works Department of Yakima and the Downtown Association of Yakima (DAY) is resulting in exciting upgrades and amenities to the parklet on North Second Street adjacent to Wheatland Park. The improvements – the results of planning by the DAY Design Committee and the envisioning of DAY Operations Manager, John O’Rourke – were proposed to the City of Yakima in hopes of restoring the existing assets of the parklet and providing enhancements that would further develop the area as a gathering spot and place of relaxation in Downtown Yakima.

The most striking first improvement is the installation of decorative pear-shaped, clear LED lightbulbs that bring better lighting and a sense of warmth to the space. The lights illuminate the parklet in a triangular formation with 64 lights stretched over 136 feet of cable.  If the lighting proves successful, more illumination could possibly be added.

Other initial improvements include addressing overcrowded and underserved areas for vegetation and readdressing the overall landscape theme of the parklet. New vegetation was introduced, and others moved to more advantageous spots. Further, more significant work will be performed in the Fall and Spring in both areas.

The Traffic Division of Public Works has begun work in resolving damaged elements of the parklet such as taking care of and capping off obsolete conduit and exposed mounting studs. Ongoing improvements are in the works that include changing out seating to make it more optimal, and brick repair.

“The goal of the project,” says DAY Executive Director, Andrew Holt, “is to address some of the repair needs of the parklet, but the greater goal is to bring this wonderful space to life! To make it a place for folks to gather, to repose, and act as a hub for smaller downtown events.”

“Much of what you see is the vision and work of John O’Rourke, DAY’s Operations Manager. We have spent a good amount of time discussing these ideas in our Design Committee with John providing the vision and the know-how.”

DAY and the City of Yakima Public Works will also be partnering on the final phase of DAY’s parking lot landscaping projects in early September. DAY’s crew over the past 3 years has relandscaped all the planter strips adjacent to and inside parking lots in the Downtown Yakima corridor, providing varieties of rock, small plants, removing or burying obsolete equipment and materials, and adding flowerpots where before there was hard pan dirt.

The Downtown Association of Yakima is a 501-C-3 nonprofit dedicated to the revitalization and historic preservation of Downtown Yakima. For more information, you can visit www.downtownyakima.com.