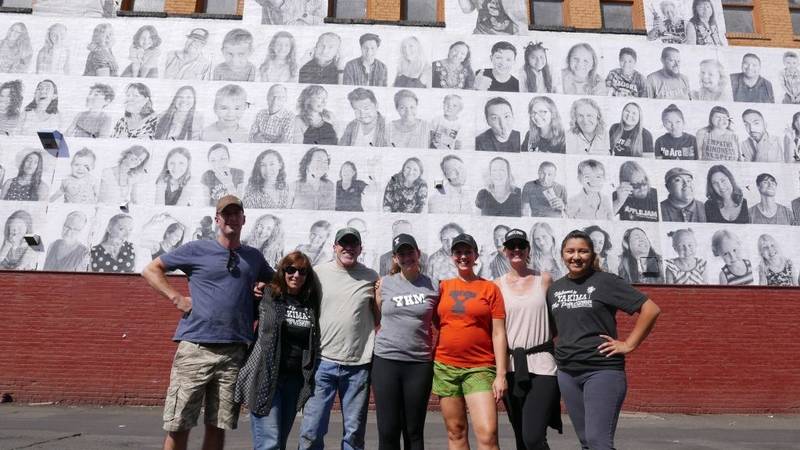 The Downtown Association of Yakima (DAY) and the community group I Heart Yakima have been recognized by the Washington State Main Street Program for the Inside Out mural project that graced the walls of a prominent Downtown Yakima building this past fall. The project, which featured 167 different portraits by local  photographer Sally Tonkin of Yakima Valley community members, was recognized as the Outstanding Special Project of 2017. The announcement was made at the annual RevitalizeWA conference April 27 in Port Townsend.

Inside Out: Love Where You Live is a global art project, founded by French artist JR, transforming messages of personal identity into works of art. I Heart Yakima, focused on community pride and engagement, decided to use the international model as a means of making locals’ civic pride visible and to enhance the resident and tourist experience in downtown Yakima.

Working with local photographer Sally Tonkin and the Downtown Association of Yakima (DAY), I Heart Yakima coordinated the large-scale temporary art installation in 2017. Eight photo shoots were hosted throughout June and July, attracting 167 proud Yakima residents to have their photos taken for the project. Tonkin edited and printed the images, which were then installed on an exterior wall of Ron’s Coins & Collectibles, a downtown Yakima building owned by DAY board member Joe Mann. DAY Operations Manager, John O’Rourke, assisted in the coordination of the installation, maintenance and removal of the mural.

The installation, which used 56 gallons of paste, totaled 2,600 square feet upon completion. The work was done by 23 volunteers, contributed approximate 400 total hours of time. A ribbon cutting on September 12 drew a large crowd, and the project continued to build momentum through stories in local media and regularly social media posts by I Heart Yakima and their partners. The installation was removed on November 29, but the images live in perpetuity at www.iheartyakima.com/insideout.

A plaque for the award was presented to both organizations at the Excellence on Main Awards which took place at the state conference. A second plaque was presented by DAY to I Heart Yakima at the monthly DAY Breakfast Meeting on May 1, 2018.

Special thanks goes to Joe Mann and John O’Rourke of DAY, and Jessica Moskwa Hawkins and Bridget Russel of I Heart Yakima.

This is the third Excellence on Main award received by DAY, the first being Outstanding Economic Vitality Project for the Thai House façade project, and the second being Outstanding Promotional Event for Chalk Art Fest: Dia De Los Muertos.