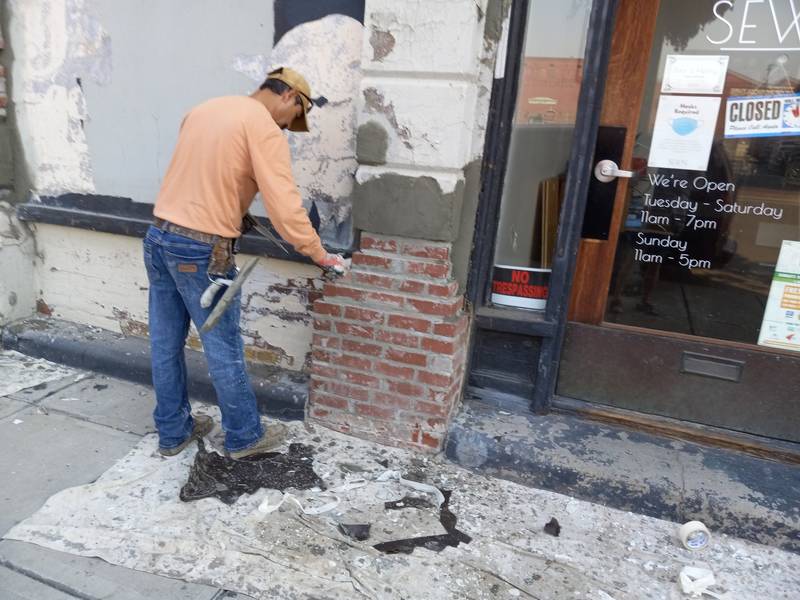 The 2021 project from the Downtown Association of Yakima (DAY) Façade Improvement Grant Program has been deemed a major success. The Opera House Building at 25 North Front Street was this year’s recipient. Owner Nancy Rayner received $10,000 to assist in the repair and enhancement of the brickwork that adorns supporting pillars and the west and south facing façade. The project also included plaster work in key areas.

The $10,000 grant was part of an overall $55,000 project that will also involve painting the façade and other embellishments. “This is why this program is so important,” says DAY Executive Director, Andrew Holt. “It sparks larger investment which in turn assists in economic development. Since the project was approved, we have seen a new business, SEWN, move into the store front on Front Street, a back shop has been rented for storage, and there is a new tattoo shop in the south facing store front. Is this growth directly related to the façade improvement? I would not be so bold as to say that, but we know that it has increased the appeal of being in the building, and certainly is a major factor.”

Holt adds, “We are also super appreciative that owners like Nancy Rayner are making such meaningful investments in their historic downtown buildings.”

The annual grant program provided by DAY is a 50/50 matching grant with the money solely for the purpose of improving a façade. The program, which has been in existence since 2015 has given over $75,000 to 9 different businesses. The funding source is a line item from the DAY operating budget and the amount allotted each year is voted on by the Board of Directors.

The application period runs from February 1 to the end of March each year with the award announcement at the beginning of May. Recipients sign an agreement and must have the project completed by the end of fall.

The Opera House building has a rich history and has experience many lives. It served as the city of Yakima’s first theater, a brewery and the nation’s first brewpub, along with being the home of many restaurants and shops. The building, which is 130 years old, is listed on the National Historic Register.

Information about the DAY Façade Improvement Grant Program, grant Instructions and applications can be found on the DAY website.